Eeep, hello and welcome to my first ever Blog Tour stop!

Thank you to Abby Endler for the opportunity to take part. I am absolutely delighted to be part of the Blog Tour for this amazing and, quite frankly, terrifying book!

The #1 internationally best-selling thriller from the author of The Hypnotist tells the chilling story of a manipulative serial killer and the two brilliant police agents who must try to beat him at his own game. 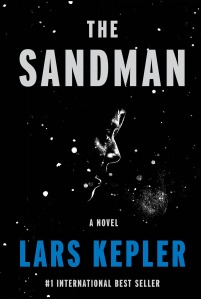 Late one night, outside Stockholm, Mikael Kohler-Frost is found wandering. Thirteen years earlier, he went missing along with his younger sister. They were long thought to have been victims of Sweden’s most notorious serial killer, Jurek Walter, now serving a life sentence in a maximum security psychiatric hospital. Now Mikael tells the police that his sister is still alive and being held by someone he knows only as the Sandman. Years ago, Detective Inspector Joona Linna made an excruciating personal sacrifice to ensure Jurek’s capture. He is keenly aware of what this killer is capable of, and now he is certain that Jurek has an accomplice. He knows that any chance of rescuing Mikael’s sister depends on getting Jurek to talk, and that the only agent capable of this is Inspector Saga Bauer, a twenty-seven-year-old prodigy. She will have to go under deep cover in the psychiatric ward where Jurek is imprisoned, and she will have to find a way to get to the psychopath before it’s too late–and before he gets inside her head.

Oh my god, The Sandman is ALL OF THE FEARS: it is gripping, chilling and horrifically compulsive.

The Sandman starts with an intriguing prologue and four of the most breath-holdingly tense chapters I have ever read and barely lets up from then on!

The story moves loosely back and forth in time with short, intense chapters and focuses on different characters or plot strands at a time, thereby keeping the pace at maximum and your interest constantly engaged.

It is tense throughout, as you follow the police’s developing investigation and learn more about the unnerving Jurek Walter and his inhuman crimes. Although there is a fair bit of blood and guts in the book, it is the psychological aspects of the case that will stay with me for some time yet.

Around the middle of the book, the police’s plan and actions, and the set up at the secure unit, were pretty far-fetched, but I was perfectly able to suspend my disbelief in the interests of such a compelling story. You just need to go with it and hold on for the ride!

Joona and Saga are both great characters, but this book is all about Jurek Walter, a uniquely twisted serial killer that you will remember long after you finish the book.

With huge thanks to the publisher, Abby and NetGalley for the ARC of The Sandman. I had not realised this but, Lars Kepler is the pseudonym of critically acclaimed husband and wife team Alexandra Coelho Ahndoril (b. 1966) and Alexander Ahndoril (b. 1967). They are the authors of the internationally bestselling Joona Linna and Saga Bauer series. With six installments to date, the series has sold ten million copies in 40 languages. The Ahndorils were both established writers before they adopted the pen name Lars Kepler, and have each published several acclaimed novels. Alexander and Alexandra married in 1994 and have three daughters together. They live in central Stockholm.

ALEXANDRA COELHO AHNDORIL
Alexandra Coelho Ahndoril was born in 1966, and grew up on the south coast of Sweden. In the early 90s, Alexandra moved to Stockholm to pursue a career in acting though she eventually became an author. In 2003, she published her critically acclaimed debut novel Stjärneborg (Stjerneborg) about the life of astronomer Tycho Brahe which received the Katapult Prize, Birgitta och Katarina (Birgitta and Katarina, 2006) about the life of Saint Birgitta of Sweden, and Mäster (2009), about the radical socialist August Palm.
In addition to her work as an author, Alexandra has also been a literary critic for two of Sweden’s largest newspapers, Göteborgs-Posten and Dagens Nyheter.

ALEXANDER AHNDORIL
Alexander was born in 1967 and grew up twelve miles north of Stockholm. Alexander studied philosophy, religion, and film at university. His first novel was picked up when he was nineteen. Before he began writing as Lars Kepler, he had already penned twenty theatre plays, one opera libretto, nine novels including Regissören (The Director, 2006) a novel about Ingmar Bergman. Regissören was nominated for several awards, including the prestigious Independent Foreign Fiction Prize and has been translated into 11 languages.

Please check out the other great blogs covering the US release of The Sandman!