Putting a Face to the Name is an occasional series discussing how I visualise the characters from some of my favourite reads.

Following my similar post about Hangman, to celebrate publication day of Daniel Cole‘s excellent Endgame, I’ve added a new Putting a Face to the Name with the characters taking a more central role in this third book, having previously been more supporting characters.

“…a quiet yet intimidating man, who smelled persistently of cigarette smoke. He was fifty-nine-years old with a weather-beaten face and a nose that had been broken on more than one occasion and never set quite right”

Given his physical description, age and his demeanour as a – largely – patient, kindly, wryly amused observer of Wolf and Baxter’s shenanigans, I picture Finlay as veteran character actor John Finnegan, co-star of many a Columbo as, variously, a police officer colleague, builder or barman: 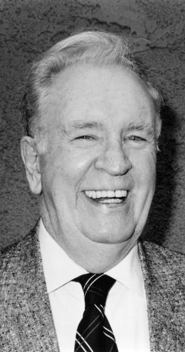 “a well-dressed man in his fifties…The handsome man was sunbed-brown. His full head of silver hair and chunky Breitling watch added to the impression that he was far too wealthy to concern himself with paid employment beyond the occasional business lunch or poolside conference call. He had a winning ‘vote me’ smile, which had evidently done its job”

“a dashing man in his fifties entered the room, his bespoke suit jarring with the taupe walls…The silver-haired man looked perplexed, deep creases forming across the leathery skin of his forehead…The man cracked a bemused smile, stopping him mid-sentence, his ice-white teeth almost glowing against his orange-tinted skin.

Handsome, fifties, sunbed-brown, silver hair (although “leathery” would be a bit harsh!) could have been written specifically about British actor Rupert Graves, who I know best as yet another police officer, Detective Inspector Greg Lestrade in the BBC’s Sherlock:

(And I don’t care what you say, this was not simply an excuse to post multiple gratuitous pictures of Rupert Graves…) 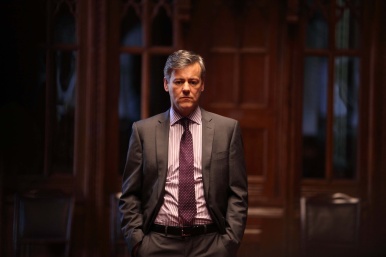 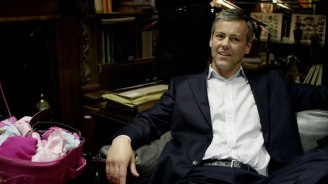 As an added extra, here’s a few of ‘Christian Bellamy’ with ‘Emily Baxter‘, or how I imagine her anyway! (Two with bonus Rob Brydon…)

“‘Christian Bellamy, Detective Chief Inspector Baxter. Baxter, this is our new commissioner . . . as of yesterday’…He and Baxter shook hands. ‘Congrats,’ she said, letting go. ‘Although, I actually already thought you were anyway.’ Vanita forced a laugh: ‘Christian moved over from Specialist, Organised and Econom—’ ‘Really don’t need his whole life story,’ Baxter interrupted, turning back to the man. ‘No offence.’ ‘None taken,’ he smiled. ‘Long story short: I was only acting commissioner.’ ‘Well,’ said Baxter, checking her watch, ‘I was only acting interested. So if you’ll excuse me . . .’ The commissioner burst into laughter: ‘You certainly don’t disappoint!’ he told her, unbuttoning his jacket to sit back down. ‘You are everything Finlay promised and more’:

“Wolf recognised the diminutive Indian woman from her regular appearances on television…He really should have spotted her approaching, seeing as she perpetually looked to have stepped out of a cartoon, that morning’s ensemble consisting of a vivid purple blazer inexplicably matched with garish orange trousers”

“She was wearing a relatively tasteful ensemble by her standards: a black jacket covering a commendable amount of the clashing garments beneath. Perhaps it was too much daytime television, maybe just were his mind was at, but if he were to categorise the outfit, he’d have gone for ‘Teletubby funeral wear'”

With no disrespect to her own dress sense, for me, Vanita is actress Nina Wadia, helped perhaps by some of her more colourful outfits in Goodness Gracious Me:

Thank you for reading Putting a Face to the Name! Please feel free to share your own impressions and opinions below.