Hello! Today I’m pleased to welcome you to JuliaPalooza for my stop on the Blog Tour for Blood Red City by Rod Reynolds, which is available now (links below). 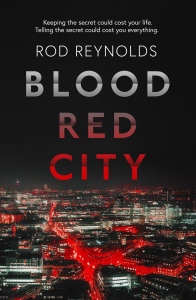 A witness with no victim. A crime with no crime scene…

When crusading journalist Lydia Wright is sent a video of an apparent murder on a London train, she thinks she’s found the story to revive her career. But she can’t find a victim, much less the killers, and the only witness has disappeared. Wary she’s fallen for fake news, she begins to doubt her instincts – until a sinister call suggests that she’s not the only one interested in the crime.

Michael Stringer deals in information – and doesn’t care which side of the law he finds himself on. But the murder on the train has left him exposed, and now he’ll stop at nothing to discover what Lydia knows.

When their paths collide, Lydia finds the story leads through a nightmare world, where money, power and politics intersect … and information is the only thing more dangerous than a bullet.

Blood Red City is a very readable crime thriller set in the quite frankly terrifying sounding underworld of money laundering, white collar financial scams and paid ‘fixers.’ Look at that cover too, what a beaut!

Lydia is a credible character – ethical but bitter and frustrated – and Michael is surprisingly similar in his own way. Both are believable and sympathetic people, each with their own moral compass and particular skill set.

Full disclosure: I was drawn to this book because the headlines reminded me of Agatha Christie‘s 4.50 from Paddington. Spoilers: that’s where any similarity to Miss Marple ends! 😉 Blood Red City is modern, gritty and complex. I’ll be honest that I don’t think I fully understood all of the technical financial goings on but that did not detract from the energy and urgency of the plot.

I really enjoyed Rod Reynolds‘s race through the shady underside of London, beneath the high-rolling, coke-snorting, huge-mansion-owning players and behind the paper-thin veneer of respectability. I liked Lydia and Stringer and would definitely read further books about these same leading characters.

Thank you to Orenda Books for my copy of Blood Red City and to Random Things Tours for my stop. 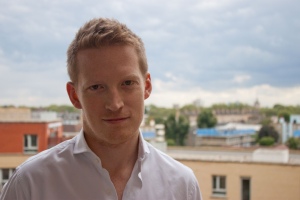 Rod Reynolds is the author of four novels, including the Charlie Yates series. His 2015 debut, The Dark Inside, was longlisted for the CWA New Blood Dagger, and was followed by Black Night Falling (2016) and Cold Desert Sky (2018); The Guardian have called the books ‘Pitch-perfect American noir.’ A lifelong Londoner, in 2020 Orenda Books will publish his first novel set in his hometown, Blood Red City. Rod previously worked in advertising as a media buyer, and holds an MA in novel writing from City University London. Rod lives with his wife and family and spends most of his time trying to keep up with his two young daughters.

Please check out the rest of the great bloggers on the tour for Blood Red City: