Hello! Happy Saturday. Today I’m pleased to welcome you to JuliaPalooza for my stop on the Blog Tour for A Killer’s Daughter by Jenna Kernan, which is available now (links below).

Who better to catch a murderer than a woman raised by one?
The beautiful young woman’s long black hair clings to her face like seaweed. As Nadine turns the body, she prays this will be different: but seeing the wounds, her prayers go unanswered. It’s just like the others. An exact match to her mother’s victims.
Keeping her head down and refusing to let anyone get close is Agent Nadine Finch’s atonement for never realising her mother Arleen was a serial killer. But when the body of a young woman is found drifting in the warm Sarasota Bay waters, right where Nadine grew up, the past she’s worked so hard to keep hidden comes calling.
Rushing to the scene, Nadine is the first to notice the circle carved around the girl’s ring finger. It’s the exact same marking Arleen left on all her victims. Suddenly, Nadine is a teenager again, watching her mother come home to their trailer in the middle of the night, covered in blood.
With a heartbroken family reeling, and no witnesses or forensic evidence, Nadine has no choice but to face her demons and visit her mother in prison. When her mother whispers a name Nadine hasn’t heard for years, the case takes a terrifyingly personal turn, and returning home, the bag of bloodied clothes left on Nadine’s bed tells her someone is watching her every move…
With her dark family history out in the open, it’s not long before suspicion falls on Nadine herself. As her team turn against her, the closer she gets to her mother and this case, the more danger she’s in. Time is running out. Can she catch the killer—or will she be the next victim of this dark family legacy?

It is an intriguing premise and the storyline is brutal and compelling. I liked the occasional chapter from the killer’s perspective and the hints and clues that were scattered there. I also liked the examples given of the techniques used by psychologists to evaluate and profile people. It’s amazing how much people give away.

Dr Nadine Finch is a well-drawn protagonist and I found her believable and credible. She is a damaged character with an unnervingly unique insight into the case. She is – understandably – a very introspective character and unfortunately I sometimes found her pensive inner monologue to be repetitive. Similarly the facts of the case(s), especially the timeline and details of Arleen’s crimes, are recounted over and over, I felt, unnecessarily. As a result, the book is a touch too long and could have been more fast-paced.

I enjoyed Nadine’s developing relationship with the police and the revelations about those around her (no spoilers). Arleen is rightly a hideous human being and it was easy to imagine her – in fact, there’s several hideous characters who need to get their just desserts. The tension really ratchets up in the final third and the denouement is full of twists and turns. I did not guess the outcome, whodunit or their motivation and I liked the way the foundations were there for a future instalment.

Thank you to Bookouture for my copy of the book and my spot on the tour.
If you enjoyed my review, please consider liking and/or sharing and, of course, buying the book: Goodreads | Amazon | Apple | Kobo | Google

Publishers Weekly bestselling author Jenna Kernan is a two-time RITA nominee and winner of the Book Buyers’ Best award. Prior to signing with Bookouture, she published over thirty novels including her popular APACHE PROTECTOR series, and is a member of numerous writing groups, including International Thriller Writers, Mystery Writers of America, Sisters in Crime, Florida Mystery Writers and Novelists, Inc. and frequently attends conferences on police procedure at the Writers Police Academy and MurderCon. Jenna currently lives on Florida’s Gulf Coast with her husband. A natural redhead, she has recently increased her sunblock to SPF 50. Website | Twitter

Please check out the rest of the great posts on the tour for A Killer’s Daughter: 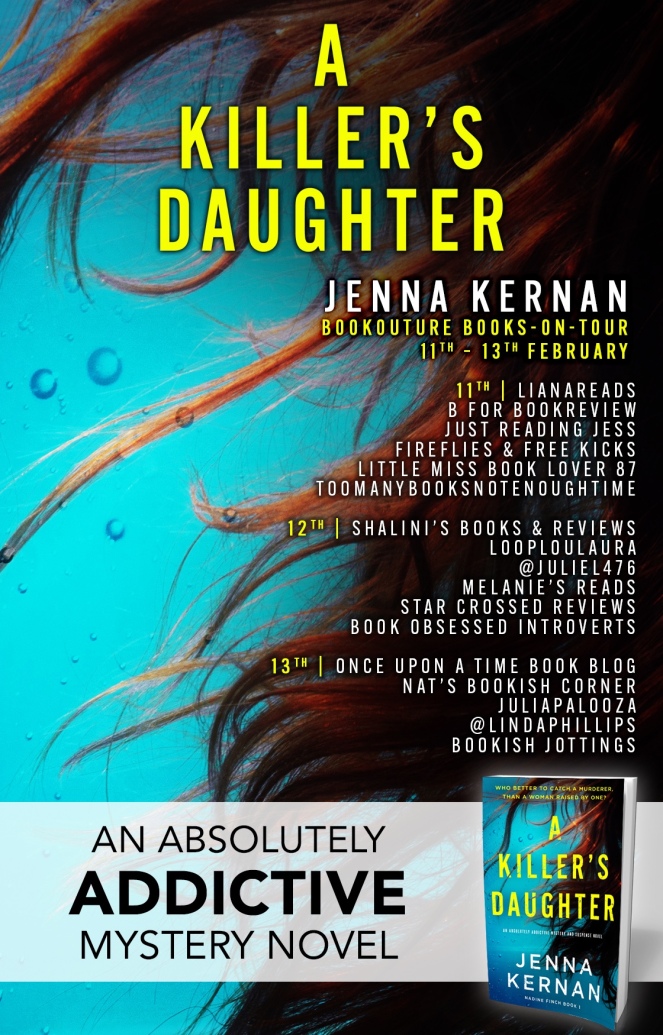