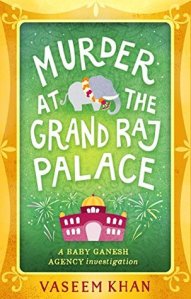 For a century the iconic Grand Raj Palace Hotel has welcomed the world’s elite. From film stars to foreign dignitaries, anyone who is anyone stays at the Grand Raj. The last thing the venerable old hotel needs is a murder… When American billionaire Hollis Burbank is found dead – the day after buying India’s most expensive painting – the authorities are keen to label it a suicide. But the man in charge of the investigation is not so sure. Chopra is called in – and discovers a hotel full of people with a reason to want Burbank dead. Accompanied by his sidekick, baby elephant Ganesha, Chopra navigates his way through the palatial building, a journey that leads him steadily to a killer, and into the heart of darkness.

Murder at the Grand Raj Palace is ultimately a good, fun murder mystery.

The book was not as cosy as I was expecting – from the cover and the general premise – as it has one or two dark themes and makes some political points; but I am not complaining.

However, although the story brings to life some picturesque, vivid and evocative images of India, unfortunately the mystery itself was a little pedestrian to begin with. For the first third or so, Chopra would talk to one suspect, they would suggest another person for him to talk to, he would talk to them and they would point the finger elsewhere and so on like a list. Added to the fact that you didn’t really have any sympathy for the victim – you never meet him alive and all the suspects make him sound unpleasant – I found the first part of the book hard going.

I persevered because I had had high hopes and I know that the series is very popular and I’m glad that I did. Ganesha the little baby elephant is a delightful and uniquely original addition to the genre, Chopra is a likeable lead and Poppy is a worthy and feisty foil. I found the subplot of Poppy trying to find a missing bride more engaging and that warmed up the whole book for me.

The main story does eventually get going and the second half of the book is definitely more enjoyable. The pace and complexity both ramp up and by the end, I was really enjoying it. If the book had had a stronger start it would have been a four star read but as a whole I’d give it 3/5 stars and I would read more from this series. (And I would like my own baby elephant now, pleasethankyou.)

Thank you to NetGalley and Hodder & Stoughton for the ARC of Murder at the Grand Raj Palace.