Putting a Face to the Name is an occasional series in which I discuss how I visualise the characters from some of my favourite reads.

Further to Part 1, I’m taking a look at some more of the best female leads of recent crime fiction.

“…she was short, athletic thin but robust; and rather intimidating…

[she] moved with surprising agility. Alexis watched her conquer the fields of snow with a demeanour that was simultaneously feline and warrior-like…

Cleanly parted in the middle, her straight, brown hair fell like a shroud across her shoulders and all the way down to her elbows…had switched from her practical sports gear into a black T-shirt and skinny jeans tucked into a pair of laced-up boots”

A small, slim, no-nonsense brunette, graceful but steely and equally at home in casual sportswear or smart work or evening wear. I imagine Emily to look like Anna Kendrick, who I first saw as an determined executive initially lacking in people skills in Up in the Air, both characteristics she shares with Emily. (Not just an excuse to include a picture of George Clooney, honest) 😉 ❤ 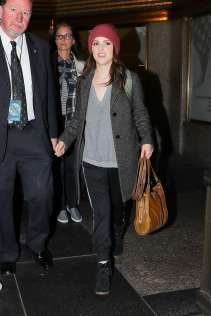 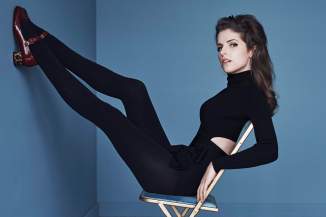 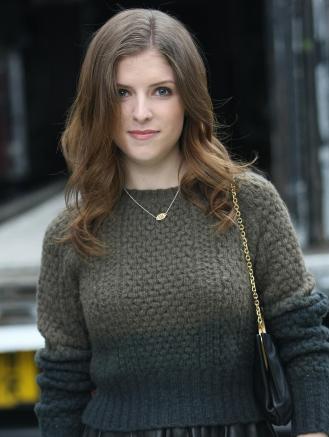 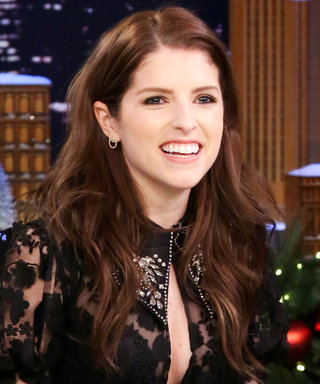 “Thirty-seven years old and she was still his ‘baby girl’…

Alexis pulled her sheath dress up her thighs and almost to the point of indecency, before climbing into the cab with as much elegance as she could muster, considering the outfit she was wearing…

Alexis, the pretty one… she sure looked fiery…

She was pinning her hair back, as she had no time to brush it properly, when the phone rang for the third time”

In this instance, I think it was partly the name similarity and partly that immediately prior to introducing Alexis, Gustawsson makes reference to two neighbourhood children with “curling, ginger hair” and my mind made a connection that wasn’t really meant to be there and consequently, for me, Alexis looks like a slightly younger Alex Kingston. 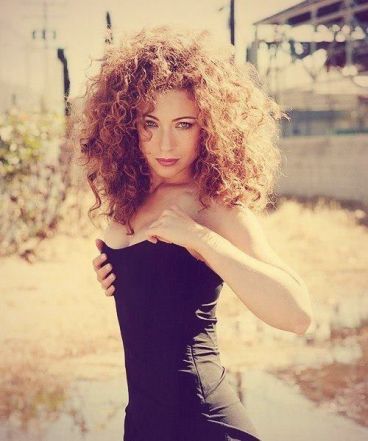 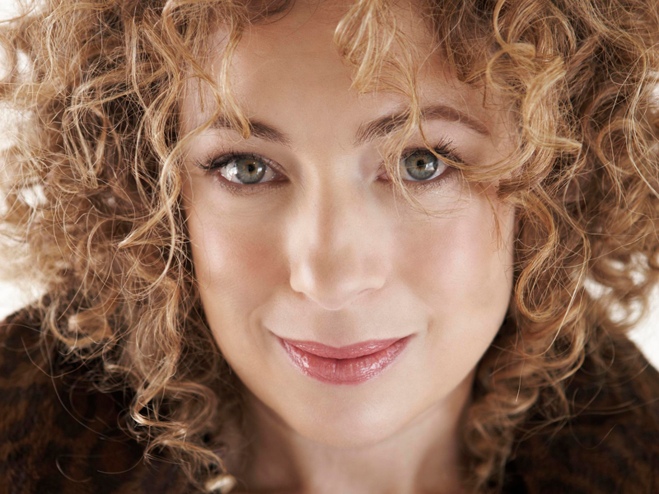 “I showered, blasted my shoulder-length curly brown hair with the blow dryer, and pulled the whole mess back into a ponytail. I brushed my teeth, swiped some mascara onto my lashes, and went with cherry lip gloss. Hunting down felons for my cousin Vinnie isn’t a great-paying job, but I make my own hours and I wear what’s comfy. A girly T-shirt, jeans, sneakers, handcuffs, and pepper spray, and I’m good to go.”

“I inherited a lot of unruly curly brown hair from the Italian side of my family, and I have a cute nose that my grandma says is a gift from God. My blue eyes and pale skin are the results of my mother’s Hungarian heritage. Not sure where my 34B boobs came from, but I’m happy with them, and I think they look okay with the rest of me”

I first read this series in the early 2000s; Seven Up was the latest instalment to have been released but the first to have caught my eye so I went back to the beginning of the series, starting with One for the Money and read all that were available in quick succession. At the same time I was still watching Coronation Street and from the first time I read the description of Stephanie, then-Corrie actress Jennifer James popped straight into my mind and she has been Stephanie for me ever since. 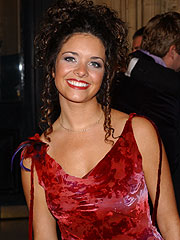 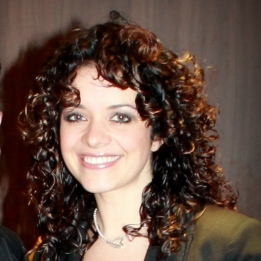 Friend, later file clerk, and even later Bounty Hunting partner, Lula – who, as confirmed by Janet Evanovich herself, does not have a surname:

“The front door banged open, and Lula stomped in. At 5′ 5″, Lula is a couple inches too short for her weight. She’s a black woman who changes her hair color like other women change their underwear, and her fashion preferences run to tiny spandex skirts and tops. Almost always she overflows out of the skirts and tops, but it seems to work for her”

“She favors neon colors and animal prints, and she fearlessly tests the limits of spandex. Today her brown hair was streaked with shocking pink to match a tank top that barely contained the bounty God had bestowed on her. The tank top stopped a couple inches above her skintight, stretchy black skirt, and the skirt ended a couple inches below her ass.”

Around the same time, Lady Marmalade and Get Ur Freak On were huge and Missy Elliott was everywhere. With her no-shit attitude, penchant for colourful hair and interesting clothes I couldn’t help but imagine her in the role of ballsy and larger than life Lula. 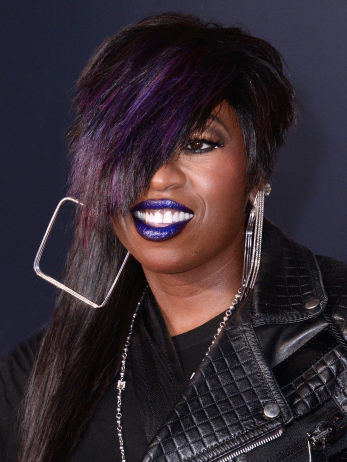 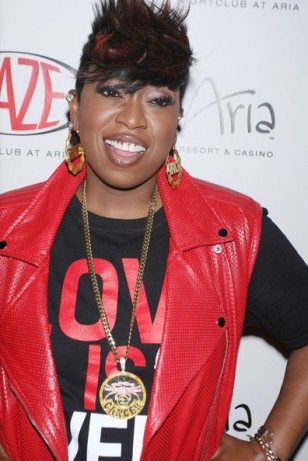 The Craftsman by Sharon Bolton

“‘My hair was different then. A much brighter shade of red.’ ‘Ginger,’ she says. ‘Colour of carrots.’

When your hair is the brightest shade of ginger imaginable, when it’s long and very curly, you get used to being stared at”

The descriptions of long, curly ginger hair took me straight to a young Nicole Kidman, although, when I was picking the pictures for this post, I was surprised to find that she had not actually been quite as red-headed as I had remembered! Still, the image was there, so, I imagine young Florence – Flossie – to look like a more ginger Nicole Kidman. 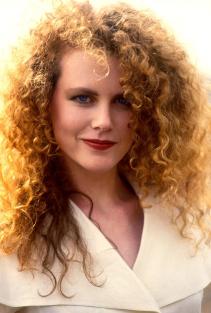 “I keep my eyes down, push my sunglasses a little higher on my nose, although I know I look very different now. Thirty years is a long time…My hair was different then. A much brighter shade of red”

The fact that older Florence now seems to have hair a darker shade of red, added to the passing of thirty years plus her new position of respected and senior police officer made me think of the striking and elegant Julianne Moore. 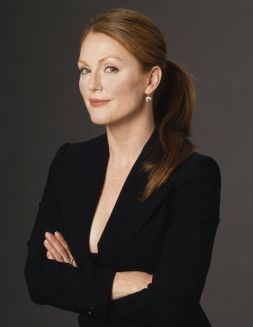 “The reception desk was a gigantic ring of oak, in the centre of which worked three women, each dressed in various shades of brown and grey. Two were middle-aged. The third looked quite elderly and was engrossed in her task…The librarian who’d approached me wore no make-up, and her huge, unruly eyebrows suggested she didn’t waste much time in front of mirrors. When she moved her head in a certain way, though, I caught a glimpse of ruby earrings. She had fat, masculine fingers, but her fingernails were perfectly shaped and painted scarlet. Her name badge said, Mrs D. Reece…Her grey eyes glittered as though about to shed tears..And then she smiled, showing big, yellow teeth…

Daphne, smaller and fatter but unmistakably Daphne, walks towards us”

Daphne was one of my favourite characters in The Craftsman, although at first glance, she was snippy and a bit over-bearing. It was partly the first description of her and partly her initially severe attitude made me think of the rude nurse who Chandler, Ross and Joey meet in the Friends episode “The One With George Stephanopoulos”, played by Mary Pat Gleason and the image stuck. 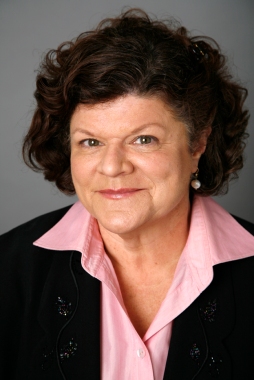 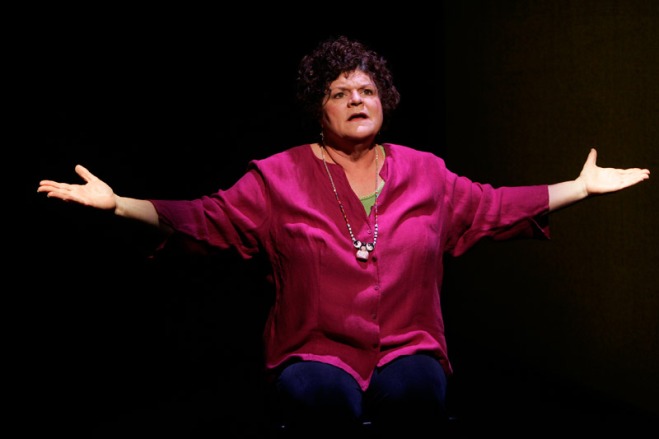 Thank you for reading Putting a Face to the Name. Please feel free to share your own impressions and opinions below!